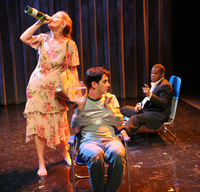 Linda Gehringer, Jonathan Rossetti, Ray Anthony Thomas
📷: Monique Carboni
We opened Atlantic Theater's Stage Two with a three week festival of ten-minute plays written by twenty playwrights. From establishing the warm comfort of a restaurant to the cold sounds of deep space to the rural south in the aftermath of a hurricane, my designs needed to quickly establish the setting as well as underscore the emotional content of the pieces.